A seven-step process for brand naming

As a result of my circular tour of duty in the world of brand consulting firms, I’ve worked on naming projects in the U.S., China, Singapore, Thailand, Malaysia, and Romania, among others. And I’ve had a behind-the-scenes view of the naming process at well over a dozen agencies, some of which specialize in naming. Just about every agency—not to mention independent consultants and clients—has their own, slightly different approach to naming. However, at a high level, there’s a generally agreed-upon process. (Of course, as with any framework, the best and most experienced practitioners know how to modify it, customize it, or even scrap it entirely when appropriate for a given client or project.)

Based on all the naming projects I’ve worked on, input from other professional namers I’ve interviewed, and a little desktop research, I’ve outlined the seven-step naming process below. Read on for notes and comments on each step.

The naming brief is usually a short document outlining the parameters for the name to be developed. It could be as little as the notes from a one-hour brainstorm session or a formal document. The brief should help the team align on details like what the name should express, what approaches are acceptable (e.g., descriptive names) or what constructs are out of bounds (e.g., no coined words).

Ideally, before name generation begins, every decision-maker reviews and approves the brief. As Clive Chafer wisely pointed out on the How Brands Are Built podcast:

The single biggest problem with naming, the single biggest thing that goes wrong from anybody’s point of view, is that somebody in the company—somebody at the client—is not brought into the process early, even though they have veto power over the name. And very often, it’s somebody down the line who is protecting their boss from getting involved because they don’t want them to have to put time into this, and then they’re saying, ‘No no no no, he’s got much more important things to think about. We’ll handle this.’ And then they come up with a name and they put it in front of this person who has not been involved, and he looks at it and goes, ‘No.’ Well, yeah! The answer is ‘no’ because you didn’t ask him what the question was in the first place.”

After reviewing the approved brief, one or more namers start generating name ideas. The initial goal is quantity—professional namers will typically create lists of hundreds or even thousands of names for a project. All name ideas should be kept in a single master list to keep things organized throughout the project.

Namers select a subset of name ideas in the master list to move forward through the rest of the process. When shortlisting and reviewing name candidates, the brief should serve as a guide to ensure a more objective consideration of ideas. Shortlisting is best played as a team sport—two or more namers should discuss the ideas, and it’s sometimes useful to get some outside perspective from someone who didn’t help generate names (ideally another experienced namer with an understanding of the assignment).

Jonathan Bell of Want suggests adding a tangible element to the shortlisting exercise:

I take a little set of index cards, and anything we like, we actually write it down and we put it on the table. …If someone disagrees, you just take it off the table.” 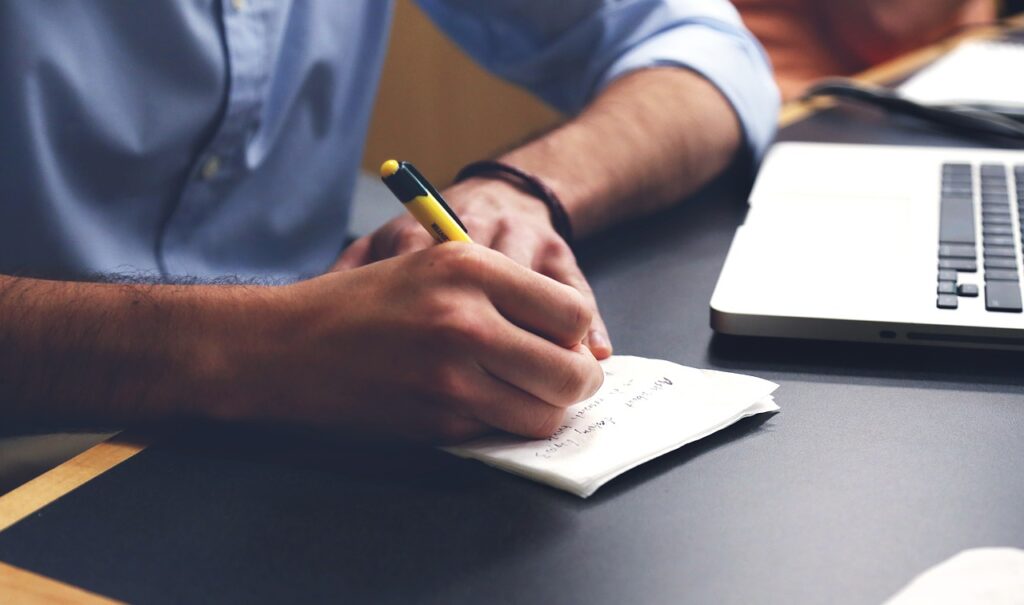 Domain name availability can also be examined at this point (if applicable). Ultimately, only those names deemed “less risky” will continue in the process.

Decision-makers review the names and select a smaller group of ideas—typically five or six—to go through full legal searches. Naming presentations often include some or all the following:

A “full naming process” often includes two or more “rounds” of naming, meaning steps two through five are repeated based on feedback on the names. For example, a team might select three names from the first naming presentation, but decide to continue exploring the concept underlying one of them in the next round of naming.

Even when names have been through a preliminary trademark screening, an experienced trademark attorney should still perform a full legal search—a more in-depth assessment of legal availability and/or risk associated with each name idea. Full legal searches can take days or weeks depending on the attorney’s process and workload.

At last, based on the brief, prescreening, legal assessment, and other factors, the decision-maker(s) choose the final name.

Have you ever used a naming process like this? Or one that differs from it significantly? Anything you’d add, modify, or omit? Drop me a note in the comments with any thoughts or questions. And happy naming!

Rob Meyerson is a brand consultant, professional namer, and host of the How Brands Are Built podcast. He is also principal and founder of Heirloom, an independent brand strategy and identity firm in the San Francisco Bay Area.

The podcast and blog are brought to you by these brands, some of whom offer deals or special pricing for visitors and listeners of How Brands Are Built. Click the logos to learn more.