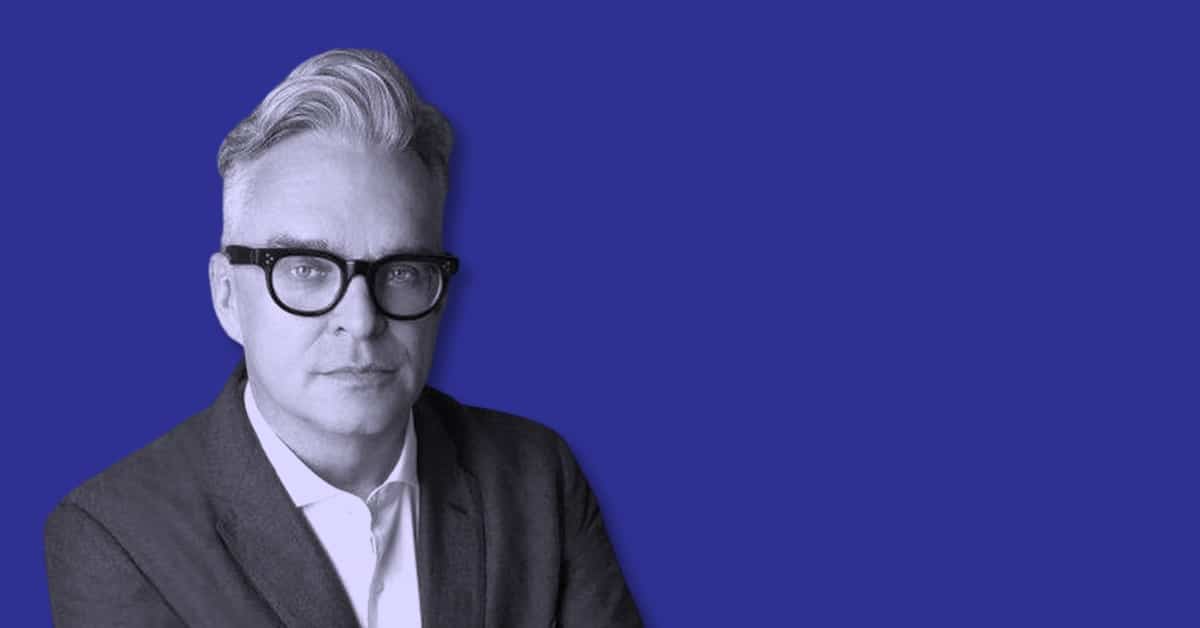 Brian’s also a teacher—a professor in the Graduate Program of the School of Visual Arts since 2001—and sits on the Board of The One Club.

Among many accolades, Collins has been named as:

He was also the first graphic designer invited to participate in the World Economic Forum in Davos, Switzerland, which you’ll hear us talk about on this episode.

Brian has long held that design and designers have the power to make a positive impact on the world (e.g., this blog post about using design to create a better future), which makes him an obvious choice for this season of the podcast, during which I’ve had many conversations about the social impact of branding. But I was originally put in touch with Brian by one of his employees, Diego Segura, a design apprentice at Collins. Diego reached out to tell me about his own experience and about the internship program at Collins, which focuses on high school students of color.

So this is part one of a two-part series. In this episode, you’ll hear my conversation with Brian about the impact of design on the world, the COLLINS internship program, and more. In part two, you’ll hear a little more of my conversation with Brian, plus a full interview with Diego, design apprentice at COLLINS. Diego will share his story and point of view on the future of the design industry.

Toward the end of the conversation, Brian offered up some great advice to young, struggling designers:

There’s no such thing as perfect projects. They don’t exist. You’ve got to take the assignments that you’ve got and turn them into something. Focus on excellence.”

Then he recommended two books:

To learn more about COLLINS, visit their website. You can also learn more about Brian at his personal site or on just about any major social media platform (Facebook, Twitter, Instagram). And don’t forget to subscribe so you can hear part two of this conversation, which will feature Brian again, as well as Diego.

Below, you’ll find a partial transcript of the episode (may contain typos and/or transcription errors). A full transcript will follow.

Click above to listen to the episode, and subscribe on Apple Podcasts or elsewhere to hear every episode of How Brands Are Built.

Disclosure: Some links in this post may be affiliate links, meaning How Brands Are Built receives a commission if you make a purchase through the links, at no cost to you. Please read our disclaimer for more information.

ROB MEYERSON: I have so much I want to talk to you about, Brian Collins, thank you for joining me on the podcast.

BRIAN COLLINS: It is my privilege. I’m grateful for your time this afternoon

B: Maybe there are two ways of looking at this. It can make an intimate impact. Impact that actually changes the trajectory of a person’s perception. Change the trajectory of a person’s relationship with a company or a product. You could change the relationship they might have with one person that’s important in their life. Design can actually do that.

So let me tell you a small way first. I was a Creative Director on the Levi’s business at Foote, Cone & Belding in San Francisco, and we were doing really interesting stuff. I was invited by Rick Boyko, the Chief Creative Officer, to start a brand new design division for Ogilvy that would work across their clients around the world.

As an organization within Ogilvy would look at brands differently that work that was basically design driven. And sort of the experiential side of the brand equation. We were one of the first agencies to really take it at a strategic level rather than the execution level. But when Boyko called, he said, I want to put design, at the very sort of top of the creative organization. I was grateful to do it.

And then we ended up redesigning—one of the first things that Rick asked me to do was we designed the brand itself. The Ogilvy brand. And in the lobby, there was this massive lobby in the Worldwide Plaza. It’s like a four, five story, open lobby, Italian marble. It looked like a big powerful corporation. They had, I think brass, Ogilvy & Mather logo—it was really stodgy. It looked like a bad—it’s like a very fancy funeral home.

And the agency was doing some of the best work it had ever, ever done. It was incredible. The agency was on fire, it had just won the Agency of the Year award. And Rick wanted to sort of reassert David’s original legacy. David Ogilvy’s original legacy. David Ogilvy said some really good things that helped define the culture and it helped actually shape that culture even after David was no longer involved with the agency—even after he passed away.