When companies ask my advice on brand renaming, my answer is typically to avoid change as much as possible. Consistency is so important to building a strong brand over time, and repetition is key to consistency. Right about when we’re getting sick of repeating our brand name is when our customers finally start to remember it.

But sometimes there is a real need for brand renaming. For example, sometimes you want to separate yourself from your product—look at Google-cum-Alphabet, for example. Sometimes, your underlying business model has changed, and a brand renaming is an opportunity to communicate about the change with your potential and existing customers. Maybe you’re in some legal hot water and you need to rename your brand to avoid getting sued. Sometimes the brand rename is part of wider rebranding efforts.

There’s no such thing as a one-size-fits-all company rebrand checklist—every company that decides to rename has to navigate these turbulent waters on its own. Want to know how to rename your business? The best way to steer clear of mistakes is to learn from others. 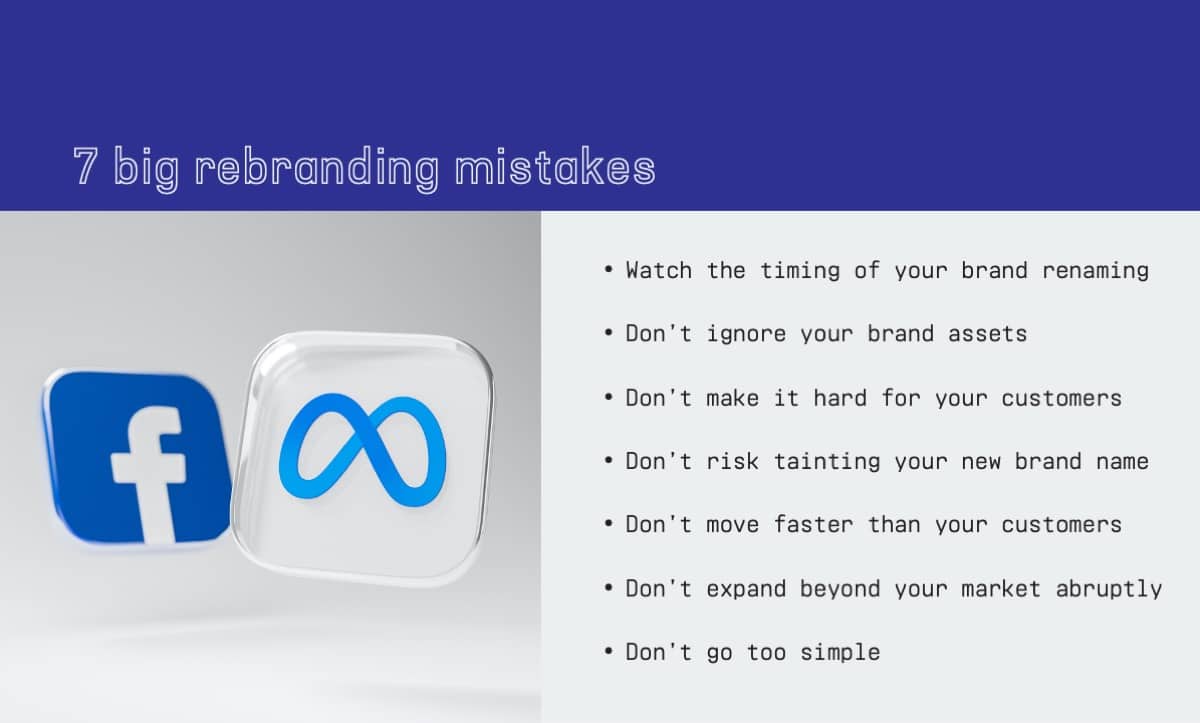 1. Don’t forget to watch the timing of your brand renaming

In October of 2021, Facebook shocked the world with its brand name change announcement.

I’ll be honest: conceptually, I don’t hate Meta as a brand name. In a vacuum, the name is fun and futuristic. It lets Meta move away from Facebook as a product, which is now associated with boomers and spam.

The problem wasn’t that Facebook renamed its brand. The problem was the timing. During the entire month of October, employee-turned-whistleblower Frances Haugen released multiple internal documents to news associations, lawmakers, and regulators showing that Facebook is aware of the harms its products cause, but doesn’t do much to try to fix those issues.

It was during that media storm that Facebook decided to announce its renaming to Meta. Consumers and media outlets alike interpreted this as a heavy-handed, obvious move to distract from bad press. Meta lost even more public goodwill.

To avoid this mistake when renaming your brand, develop an awareness of your public image. How could the brand renaming be interpreted? If you think it might look like you’re trying to cover something up or get newspapers talking about something else, consider waiting.

In 2001, the British Post Office Group changed its name to Consignia, a name that, to post office leadership, represented a “modern, meaningful, and entirely appropriate” brand. The British public was apparently not consulted in this decision. The brand rename went down in history as one of the most famous brand renaming examples for all the wrong reasons.

In their haste to modernize their image, the Post Office Group forgot that “post office” was a powerful brand asset that the public liked. A year later, perhaps in a bid to win back some public goodwill, Consignia was consigned to the trash heap of failed brand renames and replaced by the Royal Mail Group.

To avoid this kind of brand renaming failure, take stock of what your customers love about your brand image. In the Royal Mail Group’s case, they thought their customers wanted a name that reflected jazzy modernity. In reality, the public just wanted to send letters through the post office.

3. Don’t make it hard for your customers

In 2020, the brand formerly known as Aunt Jemima was renamed to become known as the Pearl Milling Company. This is a great example of when brand renaming is necessary—the brand name and artwork of Aunt Jemima were based on the racist mammy stereotype. It was overdue for a replacement.

The brand name Pearl Milling Company is based on the company’s roots in the milling industry. But it’s also long, confusing, and hard to remember. Customers would already have needed communication due to the name change, to begin with. The new brand name bears very little connection to pancakes, syrup, or anything else the brand sells, making that new connection tough.

Comcast had a bad reputation as a bloated company with bad customer service. After winning the “Worst Company in America” award in 2010, the company rebranded to Xfinity. The goal was to sound more futuristic—while slyly moving away from bad press.

It didn’t work. Customers were just annoyed that Comcast preferred to spend their resources hoodwinking their customers instead of addressing bad service. In 2014, Comcast had the dubious honor of once again being named the Worst Company in America.

What was Xfinity’s rebranding failure?

To be fair, the Xfinity name might’ve worked brilliantly—if they timed it to coincide with a significant push or major milestone in customer satisfaction. Instead, by the time they started really improving, they’d tainted the Xfinity name and the Comcast name.

Today, Xfinity has been slowly climbing the ranks of customer satisfaction according to CableTV’s annual surveys. The brand recovered, but only after actually solving the problem, not just changing the name.

5. Don’t move faster than your customers

The Netflix/Qwikster brand renaming case is not a straightforward instance of renaming. In 2011, Reed Hastings obviously thought Netflix was the future of streaming, and rightfully so in hindsight. To capitalize on the success of Netflix, the company split up DVD and streaming services, charging separately for each one. The new subsidiary DVD service was named Qwikster.

Reed Hastings may have been ready for the future of streaming, but customers weren’t.

The renaming move cost Netflix goodwill, customer numbers, and brand clarity. Qwikster was canceled a month later. Netflix lost half its value at the time. Now it has recovered, but this is still a visible blip in its stock history.

To avoid making a similar mistake when renaming your brand, ensure a deep understanding of your customer’s point of view. Understand why they stay with your company. You may think it’s time to move on from a particular service, but your customers may think differently.

6. Don’t try to expand beyond your market too abruptly

If you ask anyone what Smith & Wesson sells, even non-gun enthusiasts could tell you the company sells firearms and ammunition. The Dirty Harry movies made the Smith & Wesson .44 Magnum a cultural icon.

In 2016, Smith & Wesson changed its name to American Outdoor Brands and widened its offering to include more outdoor equipment. Especially because Smith & Wesson is such an institution, the brand renaming was a huge decision. Some experts suspected the move was to smooth over the peaks and troughs in gun buying with more reliable outdoor equipment sales. It was possibly also to distance the company from guns as a whole, which are a very fraught topic in American politics.

The problem is that Smith & Wesson is known for selling guns, not outdoor equipment. The company tried to associate itself with too broad a market. As a result, the stock dropped. In 2020, the company made the decision to split American Outdoor Brands from Smith & Wesson entirely.

Want to dodge this problem when renaming your brand? Make sure your new brand name matches the demand for your products.

Weight Watchers was enjoying a period of newfound success and brand recognition after bringing Oprah aboard in 2015. But as “diet culture” started gaining negative connotations and the concept of wellness began to take off, the company decided to shuck off the extra weight and rename the brand WW.

This led to a few problems. First, many wellness advocates pointed out that renaming the brand didn’t actually do anything to change the mission of the company, which is to help users diet and lose weight. “[D]id you think that that was going to mean that we weren’t going to realize that the WW still stands for ‘Weight Watchers?’” asked Erika Nicole Kendall, a nutritionist and personal trainer.

Second, WW didn’t create enough awareness of the rebrand amongst customers. Like Aunt Jemima to Pearl Milling Company, WW didn’t have enough meaning on its own to help customers make the connection.

Plus, when speaking aloud, WW actually has twice as many syllables as Weight Watchers. It seems foolishly optimistic that the company expected people to stop calling it Weight Watchers, given the new alternative took twice as long to say.

What happened after Weight Watchers changed its company name?

As a result, WW did not gain any goodwill with the wellness community. Customers were confused about what the brand renaming meant, given many of them were still focused on, well, watching their weight. Ultimately, WW lost 300,000 subscribers in a quarter

Weight Watchers is associated with weight and weight loss. WW is too abstract and confusing and doesn’t point to the primary selling point of weight watchers. To avoid this brand renaming problem, ensure your new name gives enough information about what your product or company does.

Ultimately, I stand by my advice: don’t rename your brand unless you have to.

If you must rename the brand, don’t fall prey to modernizing for the sake of it. You risk losing the connection to what made you a recognizable brand in the first place. Your primary focal point should be your end customer. What does your customer associate with your brand? What do they value about it?

If you can keep your customer at the heart of your brand rename—and keep these seven brand renaming mistakes in mind—it is possible to successfully rename your brand.

Zulie Rane is a freelance writer. She previously worked in sales and marketing departments for tech companies. Today, she writes for companies in various sectors, including cybersecurity, marketing, and data science.

How do I rename my brand?

When it comes to rebranding or renaming, the critical question is whether or not to do it. Once the decision has been made, coming up with a new name for your brand is similar to naming it for the first time: Make sure you pick a name that fits your brand’s story and core values.

When should I rename my brand?

You shouldn’t, unless there’s some compelling reason to do so. Reasons to rename might include legal challenges, negative associations with your current name, a merger or acquisition, or a significant change in the underlying business or product.

Is rebranding the same as renaming?

Rebranding is not the same as renaming your brand. Rebranding could refer to a new logo or package design, for example. Renaming is almost always considered a type of rebranding (unless the name change is very subtle, maybe), but many approaches to rebranding do not involve a new name.

What are the risks of rebranding?

Rebranding can make it less likely people will recognize your brand, impacting awareness and brand equity. A failed attempt at rebranding, like some of those listed in the article above, can lead to negative perceptions of your company or product.

Why is rebranding not always successful?

In some cases, rebranding may lead to the loss of an iconic logo, a change in the perception of your brand image, and a loss of existing customers.

What is the impact of bad branding?

What are some branding assets that need to be revamped after brand renaming?

After renaming, your brand will likely require a new logo along with other visual identity elements. Before launching the new name, you’ll likely to want to ensure legal availability and begin the process of securing a registered trademark. Furthermore, you’ll need to purchase a new URL or domain for the name.