David Aaker’s Brand Vision Model and how it works, part one

In his 1995 book, Building Strong Brands, David Aaker introduced his now-famous Brand Vision Model. Originally dubbed the “Brand Identity Model” it’s now commonly referred to as the “Aaker Model.i” All three of these names—Brand Vision Model, Brand Identity Model, and Aaker Model—refer to the same framework, which is explained in this two-post series. In part one, I’ll cover the basics of the model as well as the brand essence, core vision elements, and extended vision elements.

To fully grasp the thinking behind the Brand Vision Model, it’s useful to understand the context in which it was created. At the time, advertising agencies (who were “running things in those days,” according to Aaker) would define brands by developing “a three-word phrase, a single thought, a single concept—and then you develop a campaign around it.” Other agencies were using “fill-in-the-box” models, in which every brand was defined by the same kinds of ideas. Aaker was convinced both approaches were wrong.

I thought brands—certainly B2B brands, but any brand—have got multiple dimensions. … You have to allow a brand to stand for more than one thing—maybe six or twelve things.

The second thing I really disliked was the fill-in-the-box model. … It just drove me crazy. They would have eight boxes and you had to fill each one … even [if it] wasn’t relevant to your brand.”

At first glance, the Brand Vision Model might appear daunting. But the image below—taken from the front of Building Strong Brands—overcomplicates what is, in reality, a very straightforward model.

First off, we can temporarily set aside everything in the diagram except the central box labeled “Brand Identity.” (Remember, in Aaker’s updated terminology, this would be “Brand Vision.”) Within this box are two crucial pieces of the model:

The simple idea behind the Aaker Model is that every brand can stand for multiple ideas—maybe as many as six, ten, or twelve. And these ideas, attributes, or associations vary in the degree to which they are central—or “core”—to the brand’s identity. To avoid creating another fill-in-the-box model, Aaker avoids specifying how many ideas to include or what kinds of ideas to include. In other words, Aaker’s Brand Vision Model does not require the inclusion of brand personality (as does Kapferer’s Brand Identity Prism), or purpose and values (as does Marty Neumeier’s Brand Commitment Matrix), or a set number of positioning pillars (as do many agency models).

Let’s further examine the three concentric circles, which Aaker has previously referred to as the “Identity Structure.”

These outer two circles should contain about six to twelve vision elements, prioritized into core elements—usually the two to five most central to the brand’s relevance and differentiation—and extended elements, which add texture but may be less important or less differentiating. Over time, a brand’s extended elements may become core, and vice-versa.

Here are some examples of core and extended vision elements listed by Aaker in some of his books and other writings:

Interestingly, Aaker’s original model excluded a brand essence in an effort to move away from the “three-word phrase” approach he was so averse to at the time. He added the brand essence—right in the center of the model—because “it can be magic in terms of internal communication, inspiration to employees and partners, and guiding programs.”ii

In my first version of the brand identity model, I didn’t even have a brand essence because I was so attuned to the fact I didn’t want a three-word phrase to appear anywhere. I later added a brand essence because it turns out for a large percentage of the cases, that’s helpful. It’s not always helpful, but in a large percentage of the cases, it is.”

Earlier, I mentioned that this model doesn’t require the inclusion of specific components like brand personality or values. Instead, Aaker encourages the strategist to consider including these categories, but only if they make sense for the brand in question. This is a key distinction between Aaker’s model and many others. To ensure the brand has been considered from every angle, Aaker recommends strategists try thinking of it from four “perspectives”—as a) a product, b) an organization, c) a person, and d) a symbol—and consider each of 12 element categories broken out across these perspectives. 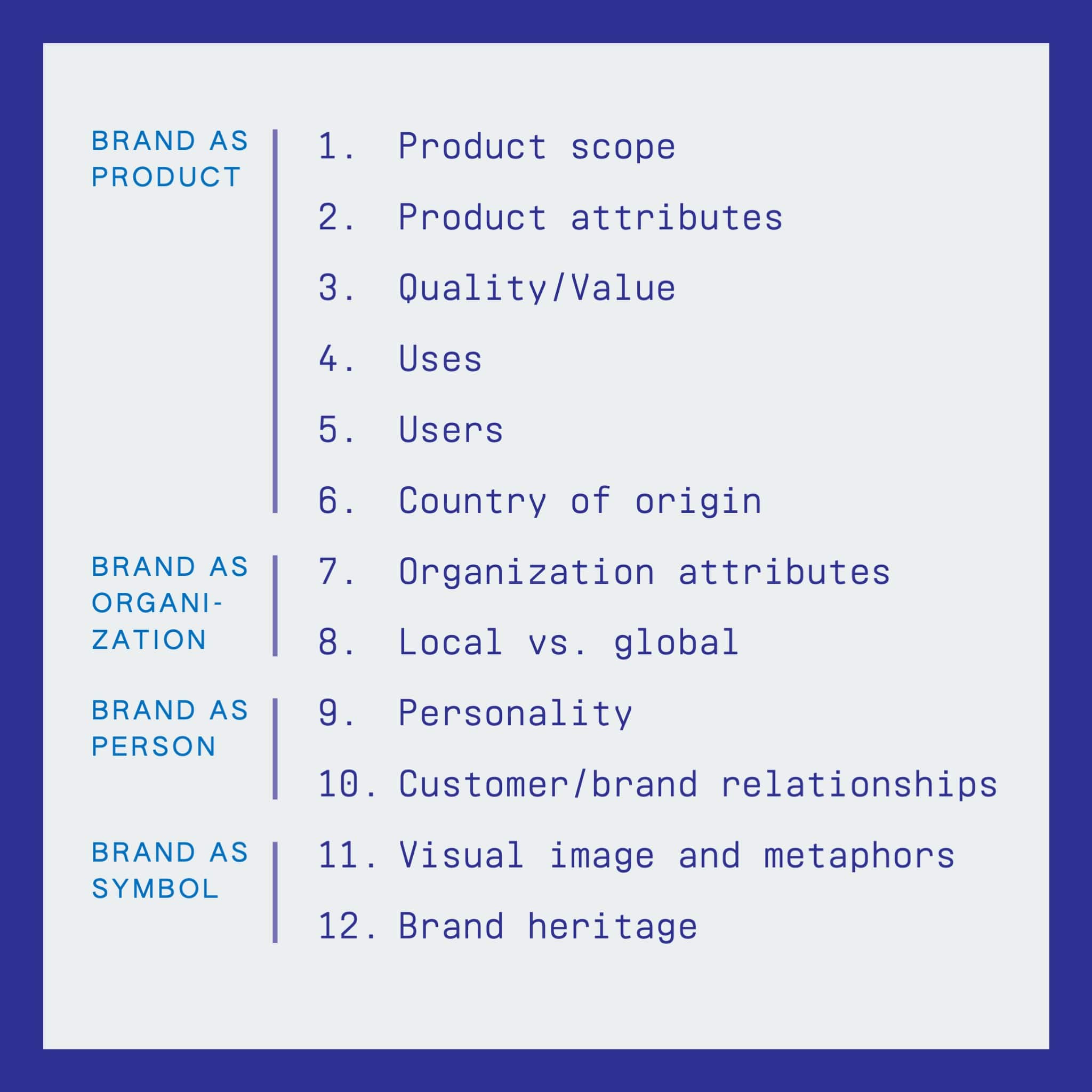 In part two of this series, I’ll go into more detail on the perspectives and elements, explaining each and providing examples.